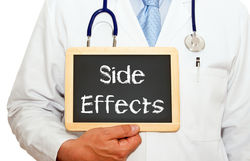 When I was first diagnosed as bipolar, I didn’t care if treatment had side effects. I only wanted to be out of the hell-hole of…